I always look forward with great anticipation to any chance I get to visit Norfolk and this was also an excuse to indulge in some migration watching and relish the spectacle of thousands of birds stopping off or passing through at this time of year. My heart always skips a beat as we approach the turning at Dersingham having just skirted the edge of the Royal estate of Sandringham and we stop off for a bacon sandwich and a cup of tea at Snettisham. Its quite a walk out to the mudflats and we never seem to catch the high tide at it's peak but nevertheless there is always still plenty to see. Several thousand Knot are just within range of my telescope and closer to us are host of other waders. Redshank, Oystercatcher, Grey Plover, Dunlin and Curlew are combing the muddy creeks and pools and several little egrets flash brilliant white against the grey horizon. There are wildfowl in good numbers and a skein of barking brent geese pass low overhead followed by a large flock of Barnacle geese honking loudly. Teal, Mallard, Widgeon and Shellduck congregate in small scattered groups and through the telescope I can pick out an odd Pintail here and there. I am suddenly aware of the sound of rushing airwaves and thousands of whooshing wingbeats and as I look up I see a cloud of in- coming blurs. The flock wheels round and changes formation, white underwings flashing as the sunlight breaks through. Plaintive cries and hundreds of tiny voices take me immediately back to the mountains of Scotland in the summer where the high peaks are alive with the breeding calls of Golden Plover. Lynn recognises this familiar sound and we can't help but smile at the sheer joy of it all! The Plover land not too far away and begin to feed almost straight away. Its good to be back here again and as we make our way to the first hide I feel elated and glad to be alive. 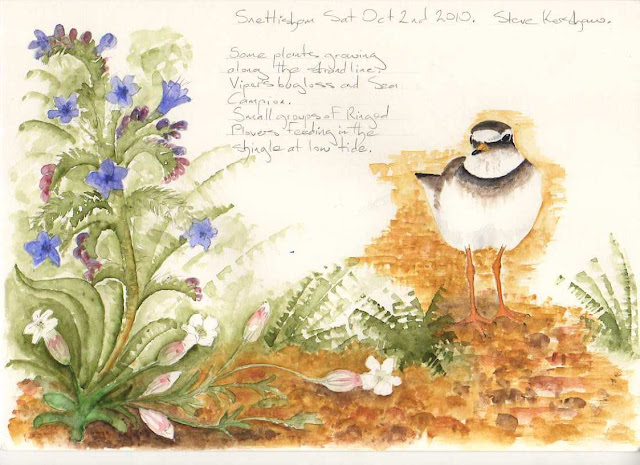 From the first hide I can train my scope on some of the smaller birds that are foraging among the shingle and scattered vegetation at the high tide mark and there are good numbers of Dunlin and Ringed Plover. Small flocks of passerines are active including Linnets, Goldfinches and Snow Buntings. I have also been watching a wheatear that seems to be roosting among the dead seaweed and marram grass. I think it may be newly arrived from Scandinavia or eastern Europe because it looks exhausted and barely moves?
I managed to take some good photographs and do lots of sketches which I later made into the following watercolour study. 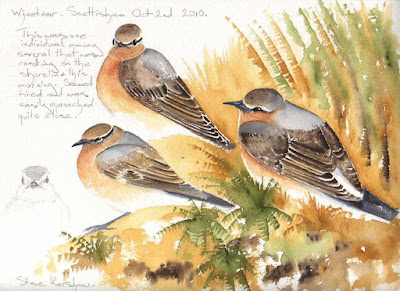 There are lots of birds in the pits and the air is filled with the raucous din of Black headed gulls squabbling amongst themselves. Cormorants stand like dark gargoyles along the far bank and tucked in to the near side and well within view are a small group of half a dozen preening Greenshank. Surely one of the most elegant waders and certainly one of my favourites! I turn my attention to the seaward side once more and in the distance a large dark shape glides into view! Lynn and I confirm it to be a Marsh Harrier! It is followed by another and then a third and as they sail slowly out into the wash they sweep everything before them. A huge panic ensues and suddenly the sky is filled with thousands and thousands of nervous waders. From horizon to horizon the wheeling flocks turn and scatter, break and re-form in desperation as they seek the safety of the many at the cost of a few!
By the time Lynn and I have visited the other hides and ticked off our tally of species, time has caught up with us and we must make tracks for Hunstanton and some refreshments! As we make our way back to the car we catch sight of a female Redstart as she dances among the brambles flashing her tail every time she flits from perch to perch! A good excuse for a painting? 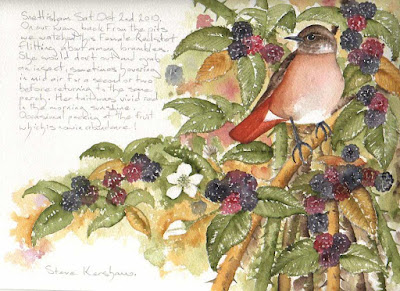 Fish and chips at Hunstanton and a cup of tea and as its bustling with seaside day trippers, we only stay long enough to say hello and to try and seek out a visiting Wryneck by the lighthouse. 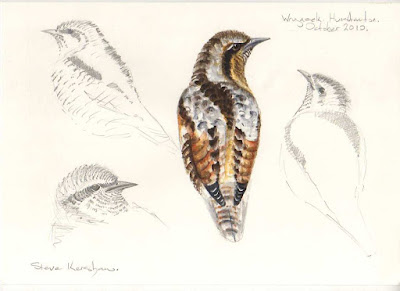 I am tempted to call in at Holme reserve to check out some of the hundreds of migrants that have been reported but time is tight and we press on to Titchwell! The reserve is undergoing some drastic changes forced on this part of the coast by sea level rise and erosion and it takes one by surprise on arrival! All for the good in the long term however and even through the disruption there are still lots of birds to see. My attention is drawn to a group of Ruff on the freshmarsh and to a pair of Little Stint that give good views close to the hide. Godwits, Redshank, Golden Plover, Dunlin and Lapwing are among the many species here today. On the brackish marsh is a Spotted Redshank and a lively Greenshank and on our way to the beach we see Whimbrel and Curlew and flocks of Meadow Pippet and Linnet. Several species of Gull are here as well as Oystercatcher, Turnstone, Bar tailed Godwit and Sanderling and just offshore are some divers and grebes. Back at the car park the trees and shrubs are alive with finches and warblers taking full advantage of the fruits and berries on offer and they pay little attention to the hundreds of birders that have come to pay homage to their kind at this most prestigeous and famous of reserves! I reluctantly tear myself away and take to the coast road once more eastward towards our final destination as the afternoon sun sinks lower in the sky! 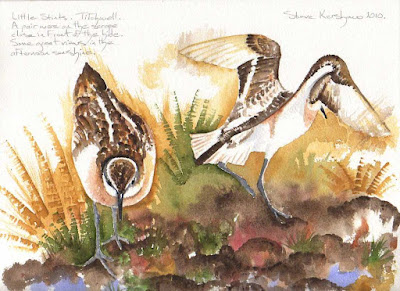 Titchwell provided lots of tempting﻿ photo and sketching opportunities and as usual there were lots of photographers in action all over the reserve! I have selected two sketches that gave me very pleasant memories of this occassion even though I have enough to fill a whole volume? There were the Little Stints that entertained so beautifully in front of the hide and some elegant Black tailed Godwits that still had traces of summer breeding plumage! 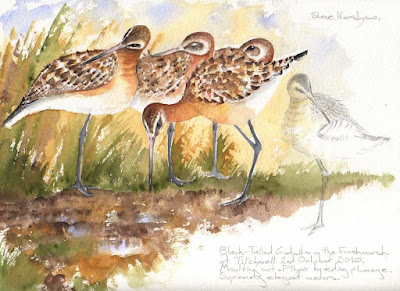 As we pass the Burnhams and Holkam gap there are hundreds of Pink footed geese and Widgeon in evidence and as the flocks cross overhead they 'whiffle' so as to loose hight and make a noisy landing on Holkam freshmarsh. As tempting as it is I can't stop! I have to press on and it is late afternoon by the time we arrive at the village of Hempstead. We could not have timed it better and as we approach the drive to the farm we are greeted by the local Barn Owl which is sitting by the side of the road on a post! We are frozen for a moment in time and just stare agape at this ghostly presence before it fixes us with a knowing gaze and dares me to reach for my camera? As soon as I move, the spell is broken and the phantom vanishes into the twighlight! The moment is captured in my memory and will never be forgotten! Superb! 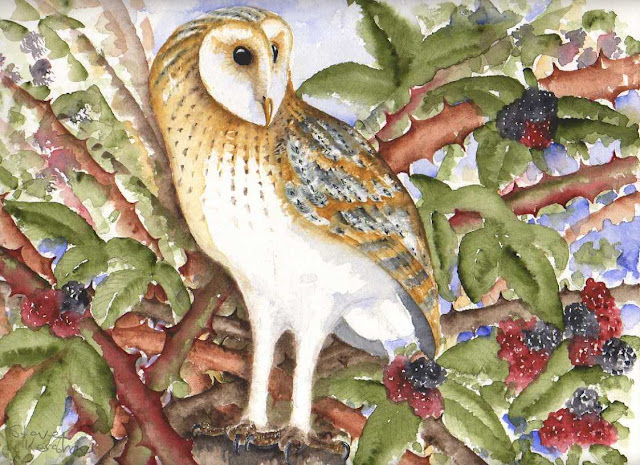 Today we went to Cley and visited several of the hides taking in the wonderful views of hundreds of birds on the various scrapes and making observations on their characteristics and behaviour! Lapwings were very noisy and easily disturbed in their nervous state and were quick to rise for fear of any large bird passing overhead. Little Stint and Dunlin probed the shallow pools in small groups and darted here and there like animated clockwork toys! A flock of Golden Plover alighted among late marsh flowers and cast a golden hue that sparkled in the sunlight. Teal and Widgeon were preening and dabbling and on a small island in the middle distance were a dozen or so roosting Avocet shimmering with reflected light from the water. A shower came and went and the wind started to increase from the south and by the time we reached the East bank it was a very stiff breeze. Our attention was drawn to a winchat clinging to the bare branches of a solitary shrub that raised it above the surounding reed bed. Arnolds marsh was alive with feeding Curlew, Dunlin and Oystercatcher and there were small flocks of Linnets and Snow Buntings flitting along the shoreline. We got very close to a Little Egret for some great views and it did'nt seem to mind being the focus of so many birder's joyful attention. A cup of tea and a bite to eat in the visitor's centre rounded off our day and we still had time to explore the village before we went home. My sketch shows the Winchat we saw that afternoon. 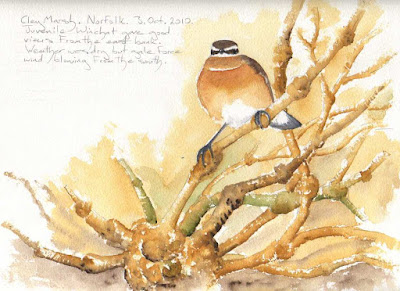 On our way back home we stopped off at Welney Wildfowl and wetlands trust reserve and were greeted with the news that a 'Wilson's Phalarope' was giving good views in front of the main observatory! A superb little bird and one which drew the attention of hundreds of twitchers! A great little earner for WWT as well! Needless to say there are always vast numbers of wildfowl to see and I was particularly pleased to find some gorgeous Pintail in among the flocks of Mallard, Widgeon and Teal. Waders were very strong too and included Godwit, Snipe, Dunlin, Lapwing and Ringed Plover and we even had an early Whooper Swan. Marsh Harrier and Sparrowhawk tormented the host and there was even a late pair of Swallows still feeding young in a low hung nest in the Lyle hide! All in all we managed to see over one hundred species over the weekend and had a wonderful time despite missing a few rare migrants and a Short Eared Owl somewhere on the reserve! Ah well! There's always next time? 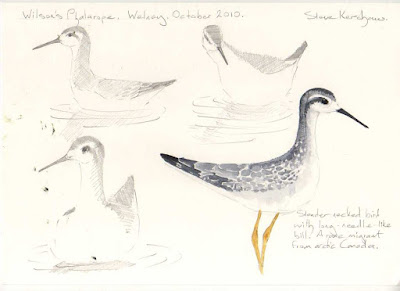 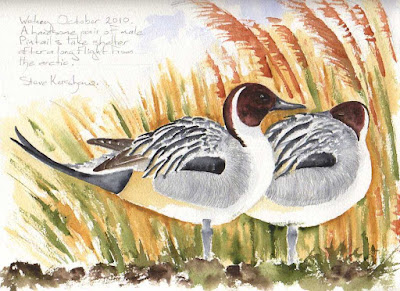 Steve Kershaw
Hertfordshire, United Kingdom
I am a professional musician and guitar teacher living in Hertfordshire with my wife Lynn and daughter Wendy. My passion is wildlife watching and sketching and I try to paint whatever I see. My favourite medium is watercolour.